Been a couple of weeks since I posted. Many good things have happened since then. I got to work with an outstanding young woman from my area of the state on a project that highlighted mental health. Don’t know if she wants to be recognized here or not, so I’ll just use her first name. Alia is a bright, talented high school student who agreed some months ago to work on a project with a 39-year-old man who has paranoid schizophrenia (me). Guess that makes her kind of a risk-taker, too. My clinical psychologist, Dr. Nancy Merbitz, she, and I gave two presentations earlier this month at the Bloomington Center for the Performing Arts.

Alia and I worked on and off for the better part of four months to bring what we hoped would be a worthwhile presentation to the audience. I think we succeeded. I feel like we did. We received a lot of positive feedback from the audience. Alia created and delivered a very professional Powerpoint presentation and then asked Dr. Nancy and me some very important questions regarding people (in general) who have schizophrenia and then specifically about my experiences with the disorder. Topics ranged from schizophrenia and the media, schizophrenia and violence, hallucinations and delusions, my family life, and what has been helpful to me in my recovery process. My hope is that we were able to dispel some myths and educate the audience about a widely misunderstood illness.

Not to be forgotten, though, is the importance of the three of us working together. Dr. Nancy is the consummate professional, one with whom I have worked for quite a number of years. She understands the disorder as well as any professional I have come across. However, Alia, I don’t think, had any clue what to expect. In truth, although she said she was fascinated by my story, she also admitted that she was a bit scared of this project (me). To be honest, Alia, in the beginning, the same was true for me.

I suppose the point to this is that we both took a risk. And, even though I was a bit of scared of working with someone I didn’t know, I think Alia took the bigger risk. I can’t imagine the courage that it took to accept this project, but that is what she did. Through it all, she didn’t seem to get too shaken. Even when some of my ideas and statements may have been a little grandiose (and some of them, especially in the beginning, probably were), she didn’t falter.

I could say many more things, but I think the most important thing I could say is thank you. Thank you for taking the chance on me, for agreeing to do this project. Without your help, your genuine curiosity, and your courage, this wouldn’t have been possible. We did something good earlier this month…not only for me but for the mentally ill population, the community-at-large, as well as for ourselves.

Maybe the next time an opportunity arises for you to speak up on behalf of someone or a group of someones who perhaps lack the ability to speak up for themselves, you too will be as brave as Alia. I’d like to think that most of us would take that chance. Not speaking up and not letting your voice be heard, to me anyway (and I would bet to most people), doesn’t feel really good. Speaking up and taking action may be harder at first, but believe me when I say, that it is very rewarding. Thank you to Dr. Nancy for her hard work; as well as being a top-notch professional in the field, she is also an avid advocate for mental health. And, thank you, Alia. I don’t know what path your life will take, but I know that for a couple of evenings in May 2010, you spoke up for the mentally ill population, and for that, you should be very proud of yourself.

Best wishes to all…

I take my medications, go to therapy, and have support around me, but…

So, what do I do? I continue to take my meds, go to therapy, and enjoy the support I have.

I’m still cycling. Not as bad as I used to cycle, but they’re still there…the cycles, I mean. I’m pretty fucked up. Just trying to figure this thing out, when perhaps I shouldn’t think things over too much. That’s the conclusion I usually come up with anyway…after I’ve struggled to figure out why I think, feel, and behave like I do. Mostly, I think I’m a slave to my emotions and to my own brain. Maybe that’s a cop-out statement, I don’t know.

I do know this: I’m going to pick up my 4 1/2 year-old daughter tomorrow, and we are going to have a blast together this weekend. I can’t wait. As for the other stuff, guess I’ll have to deal with that after this weekend.

Hope everyone’s weekend is a good one.

Recently, I participated in two very important events. The first event took place at The Normal Theatre in downtown Normal, Illinois. I had the privilege of being invited to a private showing of The Soloist, a real-life dramatic depiction of the life of Nathaniel Ayers as seen through the eyes (and pen) of Los Angeles Times columnist, Steve Lopez. Needless to say, Robert Downey, Jr. was magnificent and was only outdone by Jamie Foxx’s interpretation of Nathaniel Ayers, a Juilliard dropout who lives and breathes the cello and who also happens to have schizophrenia. A reception followed at The Marriott where hors-d’oeuvres were served and good conversations were had. To say that this event was worthwhile is an understatement especially given Friday’s vote in the Illinois legislature regarding statewide funding for community mental health programs. This event took place on Saturday, May 1st and was used to kick off Mental Health Awareness Month. I had a great time!!

An equally important event took place on Tuesday, May 4th when I had the honor of giving a talk to the psychology students at Normal Community West High School. A few members of the faculty and at least one member of the administration were also in attendance as was a representative from Tri-Valley schools. A representative of the DeWitt County Human Resource Center (and a dear friend) was also in attendance. I really appreciate the interest shown in this event. The faculty and administration deserve plenty of kudos for having the courage and foresight to care about those afflicted with diagnosable mental illnesses. My clinical psychologist, Dr. Nancy Merbitz, participated in this talk also by adding a professional perspective to the presentation. Her presence on stage with me was comforting, educational, and at times, moving. Thank you, Dr. Nancy! My dad was there, too.  He even fielded a question! Great job, Dad. Thanks for attending.

However, the heroes of the day were without a doubt the students (which included two students from the McLean County Diversity Project). It was evident by the sheer volume and quality of the questions that were asked that this group had worked hard to be prepared for this event. They definitely had a level of understanding of schizophrenia beyond what I was anticipating. The interest they showed was heartening, a real morale booster. Great questions, Students! A special thank you to Mr. Hill and Mrs. Mayer for helping to prepare their students!

Finally, a couple of people who were integral in seeing this project through to its fruition. The first person is Mr. John (Jeremiah) Bierbaum. The events that precipitated this talk were tragic indeed. I feel for all of those affected. Mr. Bierbaum, thank you for not staying silent. Thank you for speaking up for those of us who are or were unable to speak up for ourselves. It was an honor to meet you.

The second person I would like to thank is Mr. Jeff Schwartz. This guy is unbelievable. Talk about a real go-getter! This guy gets locked in on an idea or cause and does not quit. He is the Energizer Bunny on steroids, and I mean that in the best possible way imaginable. If he wants something to happen badly enough in and around McLean County, chances are overwhelmingly in his favor that it will happen. He has become an extremely strong advocate for mental health and wellness in our area of the state. Without his help and hard work, this event would not have taken place. Thank you, Jeff!

In closing, I would like to say that I thoroughly enjoyed my time and participation in these two events. Thank you to everyone who attended them! People have been very good to me. If there is anything I can ever do to help you or someone you know, please let me know.

Have a great Friday, Everyone! 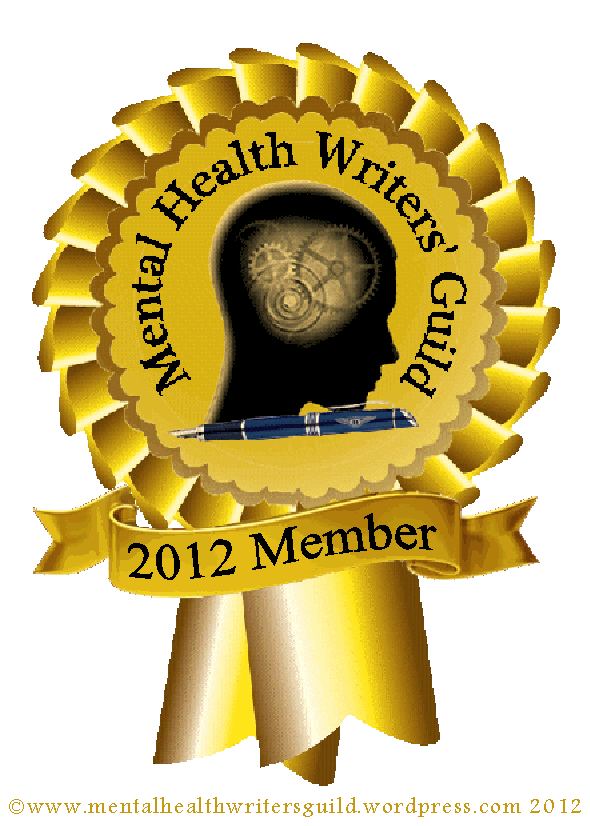 Typically Atypical is proud to be a member of the Mental Health Writers' Guild.
Further information concerning the Guild can be found here.

Helping others understand mental health in a unique way

this is about my writing

A potpourri of emotions

Musings and books from a grunty overthinker

Sure Signs: An Astrology Project

getting motivated and unstuck with horoscopes

Another Book on a Shelf

Is it a masterpiece or just another book on a shelf?

Celebrating Nature and Magic for Kids of all Ages